Who doesn’t remember setting up a trail of dominoes and knocking over the first one to set up the captivating chain reaction collapse of the whole shebang? The visual treat is as intoxicating as the sound the dominoes make click-clicking against each other as they fall. Worth the effort, one must agree.

Chain reactions of this sort fascinated Rube Goldberg (1883-1970). First and foremost, Goldberg was a cartoonist, but he is well known for his deliberately over engineered machines which performed very simple tasks in a very complicated manner. His machines usually included a chain reaction and were so fascinating that they came to be called “Rube Goldberg Machines.”

The Chicago based indie rock band OK Go has a music video for their song “This Too Shall Pass” which is a mind-bogglingly long Rube Goldberg Machine. While you watch, notice that they shot the whole video in one long take without cuts. They did this to show that the whole sequence was one continuous machine without editing. Flawless, geek-worthy and so impressive.

It would be one thing if just the song was cool, but this video is one of the best visual manifestations of lyrics I’ve ever seen. 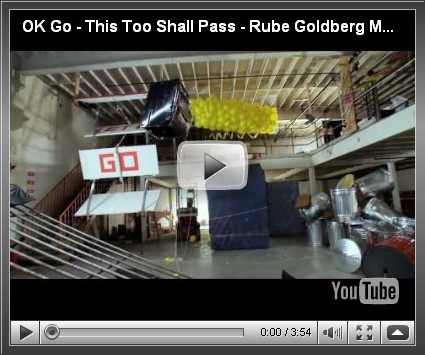