The glazedOver Studio Gets a Lick of Paint

Well, I should be clear, there’s no point in stretching the truth. The studio itself didn’t get painted, just my mother’s old childhood bookshelf did. Here is where my inspiration came from: 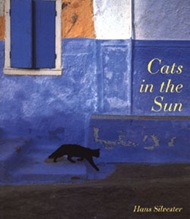 We’ve long had this gorgeous photography book Cats in the Sun by Hans Silvester. Looking now I see that it was first published in 1993 which, gosh! is a full 17 years ago. (Funny, it feels like just yesterday I was writing 1993 in my checkbook…where does the time go?)

Silvester spent months in the Greek islands observing the behavior of cats before he even took a single photograph. He writes:

“…I observed them at all hours of the day and night, and through every season, with all the patience needed to disturb them as little as possible. To the Greeks, I quickly became the fool who runs after the cats. I made them smile, but it was with the greatest kindness that they brought me coffee and cakes and told me stories about their favorite cats during the long hours that I waited for the best moment to take my photographs.”

He captured some phenomenal cat moments. My girls love to flip through the pages because the cats are so cute, but beyond that the spectacular splashes of blue on the white stucco backdrops of the Greek islands has always made my heart go pitter patter. If I could successfully do my house over in white stucco and paint the window shutters cobalt blue without it alarming the neighbors, I would.

Alas, my neighbors already wonder about me so the house should probably remain shingled for now, but that doesn’t mean I can’t put a nod to the Greek islands in my ceramic studio! 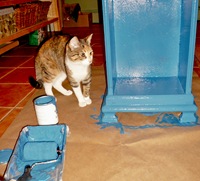 To accomplish that, I’ve painted the bookshelf blue. The walls have a light brown clay colored paint which will have pretend it’s white stucco and the pop of blue that the bookshelf adds is just the cat’s meow, pun intended!

Mango actually sniffed a little too close to the wet paint and got a smidge on her nose. If Hans Silvester hires me to write the sequel to Cats in the Sun, I think I’ll call it Cats in the Kitchen and use this photo as the cover shot. What do you think? 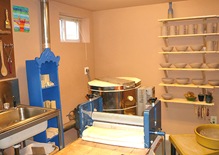 Here’s what it looks like in the studio. See the new shelves behind the pottery wheel on the right hand side of the photograph?  My studio is painfully small. With any luck we'll eventually be able to move to a place where I can have my own huge barn completely dedicated to clay work. Why it must be a barn, per se, is beyond me...somewhere along the line I must have associated barns with all things rustic and romantic.

The other day while I was seated at the pottery wheel trying to brainstorm the space problem, my husband saw potential over my right shoulder. Ikea for supplies and my daughter to the rescue  now I've got more shelf space AND a blue blookshelf.