He had a broad and discriminating palate and is known for having influenced a whole generation—and all those that followed—to eat a variety of exclusively small appetizer sized portions together with their sherry.

Historians differ as to his rationale for this, but there are three prevailing theories:

1.  Tapas, in an attempt to manage his increasingly girlish figure, resorted to eating smaller portions

2.  Tapas actually had only a small appetite

3.  Tapas didn’t have much food left and was just trying to make it last longer 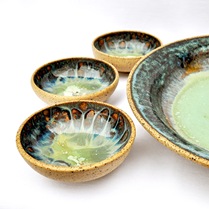 Historians may differ, but whatever. What IS important is how glazedOver has risen to the occasion to celebrate not only Don Alfonso Tapas, but the small portion based cuisine which he invented. New from the glazedOver Pottery studio is this four piece eclectic stoneware tapas set featuring the glazedOver signature Green Sherbert glazing on an earthy speckled stoneware backdrop.

For some serious history, I should admit that rather than giving Don Alfonse Tapas the credit, credit is actually due to the Spanish tavern owners for first having served tapas, which is a variety of small and succulent appetizers served either hot or cold. The word “tapas” itself comes from the Spanish word tapar which means “to cover.” Why does “to cover” have anything to do with such cuisine? An excellent question. I’m so glad you asked!

According to The Joy of Cooking by Irma Rombauer et. al., tapas began as slices of bread or salty meat that patrons would use to cover their glasses of sherry in order to keep the fruit flies out. It made good business sense for the taverns to continue to offer such snacks with libations so that customers would continue to order more drinks. 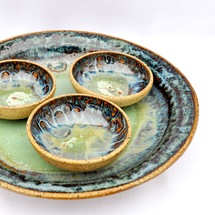 “Eat while you drink; drink while you eat,” as they say.  Nice motto!

In case you are culinarily inclined and just about to google “tapas recipes,” I should tell you that there are no set rules for what constitutes tapas, per se. Garlic marinated black olives, spiced meatballs, stuffed tomatoes, shrimp fritters, artichoke croquetas, mushrooms vinaigrette,  hot fried patatas…whatever strikes your fancy. Bon appetit!