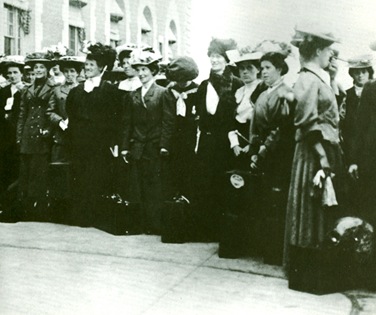 On September 29, 1907, a steamship called “The Baltic” docked at a New York harbor and let 1,002 would-be brides from Europe disembark in search of husbands. Apparently, the women on board were as excited as the hopeful men waiting at the docks. “I like tall men and blondes,” said Susan Thompson frankly, and then her companions all screamed and Susan laughed until she could hardly speak. “I have read much about Americans making good husbands.”

Miss Agnes McGirr’s home is in Edinburgh. “I want a man with dark hair,” she chirped. “A city man? No, a farmer. A man who is making $1000 a year will do. That isn’t too much to ask in this country is it? How old? Thirty. He has some sense then.”

“They tell me,” remarked Nellie O’Brien from Loch Crae, Tipperary, “that there are no men in Pittsburgh but millionaires. I’m going there, and it’s soon I’ll be riding in my own carriage, I suppose.”
(excerpt from New York World newspaper)

It is fascinating that the world has changed so much in just one hundred years. Just as amazing is that in many ways, it has remained quite the same.