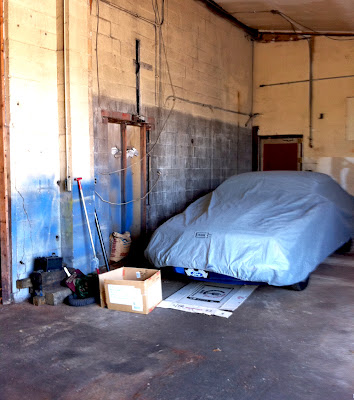 I love this photograph! I snapped it this week with my new, fabulous iphone while I was waiting for the mechanics to finish doing an oil change on my car.  This car, as they told me, is some mint something-or-another with an $8,000 paint job (who DOES that??). They bring it every week to one of those pop-the-hood car shows. They say they make some really decent money buying, fixing up, and selling cars like this.

It all reminded me of the auto body work I did way back when I was in high school. I had worked for several summers at a very cool snack bar at our local ferry dock to Fire Island. I loved working there because all of the Manhattan weekenders would come through on their way to their island bungalows and it made me feel like I was a part of all of that. Difficult bosses excepted, it was a great experience.

Anyway, I had saved up my money and bought myself this awesome Volkswagon Superbeetle convertible. It was the most fabulous thing, I felt like the cat’s meow driving it. The honeymoon lasted for a while and even included the great day when it made an appearance in the high school homecoming parade. 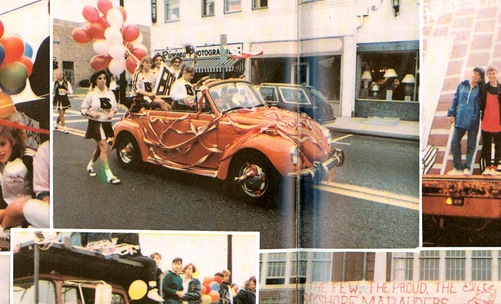 This was the photo that made it into the yearbook. That’s me in the back seat all the way on the right and that’s my dad driving the car.

But alas, like most old beetles, mascara and blush could only get it so far before the rust started to become a serious problem.  Once we started to dig around looking for it, we discovered that it was covering most of the body of the car. It was so severe that it ate through much of the floor. Funny, we still needed to use the car at that point so we simply drove it without most of the floor. We were driving like Fred Flintstone, watching the highway speeding by under our feet! I kid you not. 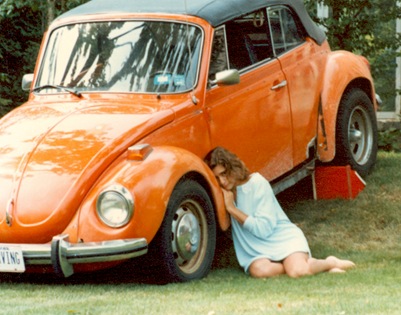 Here I am on the day we started digging around for rust. I was heartbroken as you can see. 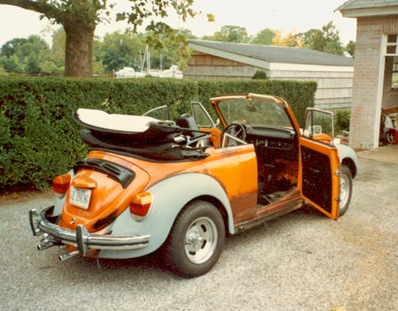 And it only got worse.

It was a long and grueling process and I learned more about fiberglass and Bondo than I would ever have wanted to, but in the end we too turned a profit. We sold it for twice what I bought it for.

Not bad for a couple of rookies.