Lumpsuckers and their Dumpy Parents 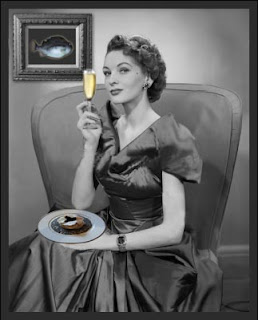 My eleven year old is very independent, so when she asked me to read her a bedtime story recently, she caught my attention. But she’s not only independent, she is also very cerebral. So she pulled Eyewitness Books: Ocean (rather than, say Watership Down) from her bookshelf, and she didn’t surprise me at all. She promised me that I wouldn’t have to read each and every page so I jumped right in.

You’d never think there’d be so much to laugh at in such a book and maybe it was just because it was so late and we were both a bit punch drunk, but Sheva and I had a giddy time of it. She wanted to know, for instance, if octopi make octo-pee-pee, how to cook lobsters to minimize the screaming (I used to work in a clam bar, I had the answer), and why the dolphin’s flipper bones look so reminiscent of my wind chimes. But nothing caused the giggles as much as the lumpsuckers. I wasn’t familiar with lumpsuckers, but apparently, they have really motly parents, putting  a new spin on “your mama is so ugly that…”
Not among the great marvels of the ocean, lumpsuckers are primarily bottom dwellers. They are mostly spherical in shape and have suckers on the bottom of their bodies which make it possible for them to cling to rocks snail-like.
The young fish, which according to Miranda MacQuitty, author of Ocean, are “more beautiful than their dumpy parents,” use their suckers to cling to rocks in shallow, warm water until they are fully developed. Then they move to deeper waters where their muddy adult color allows them to better blend in.

And for those of you who are wanna-be jet-setters shackled by budgetary constraints, you’ll be relieved to hear that lumpsucker fish eggs are a popular and affordable alternative to caviar.