Have you ever seen any of the old Jimmy Neutron episodes where Jimmy’s father, Hugh, wiggles out of an uncomfortable moment—in which he’s invariably reprimanding Jimmy for something or another—by saying (in his ridiculous voice): “Who wants pie?” Well, I can’t seem to serve my pies without copping Hugh’s accent but luckily, in my house, everybody wants pie.

The most remarkable Yael, of FabricCrafts and Pazzapazza has encouraged me to share my recipe for apple pie and since Sheva has also blogged about one of our favorite recipes this week, I thought I’d chime in with the details. We did have all those apples, you know. 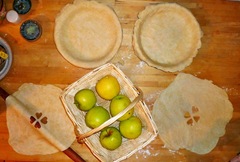 Stir together flour and salt. Using a pastry blender, cut in shortening until the pieces are pea-sized. Sprinkle 1 tablespoon of the water over the mixture and gently toss with a fork. Repeat this using 1 tablespoon of water at a time until the dough is moistened. Divide dough in half and form each half into a ball.

On a lightly floured surface, flatten 1 dough ball and roll it flat until it forms a 12-inch circle.  To transfer it to the pie dish, drape it on a rolling pin and trim it evenly with the rim of the dish. Roll out the 2nd dough ball the same way. Cut slits (or fancy schmancy shapes like I did) so that the steam can escape during baking.

After the filling is in the pie (see below), drape the top crust on top and trip it to 1/2 inch beyond the edge of the pie dish. Fold it under the bottom pastry and crimp the edge to create a fluted edge. 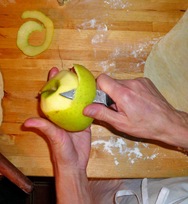 Peel, core, and slice 6 cups worth of ripe apples. In a large bowl stir together sugar, flour, cinnamon, and nutmeg. Add apple slices and toss until coated. Fill pie crust and cover with remaining pastry as explained above.

To prevent the pie from burning while cooking, cover the edge of the pie with aluminum foil. You can simply fold the foil in half and rip off a smallish half circle right at the fold and then drape it over the pie. Bake covered like this in a 375° oven for 25 minutes, then remove the foil and bake for another 25-30 minutes until the pie finally looks like a pie.